What Goa eats during Ganesh Chaturthi

A glimpse of the culinary offerings of this beloved festival

It is Goa’s biggest Hindu festival. Ganesh Chaturthi, locally called chovoth, is a monsoon festival that brings together families scattered around the world. Houses shut through the year open their doors to welcome the elephant-headed god, in the form of clay idols. Chovoth is largely a family festival, but community celebrations are held too.

It is a festival that truly celebrates nature, and the bounty of the land.

“Everything that is cooked, eaten and offered to the gods is local and often, picked up from our own backyards. Goa is known for its abundance of rice and coconut and these find their way into dishes and sweets. The pujas use different leaves and flowers. And finally, the matoli [a wooden canopy above the idol] uses wild herbs, leaves, fruit and vegetables," says Dr Purnima Usgaonkar of Usgaonkar’s Children Hospital in Ponda.

The festival also celebrates the first harvest of the season or navem. “The sprigs of freshly harvested rice are brought from the temple and offered to the god. After the visarjan, these are hung in front of the house for the coming year,” says Tanavi Raicar, a Goan based in the US.

Chovoth is also an important culinary event in the Goan Hindu calendar.

A Goan meal may be incomplete without fish but Hindus abstain from it during Shravan, sticking to xivrak (vegetarian food), made without onion or garlic. In the absence of meat and fish, they turn to lentils, pulses and seasonal vegetables.

Though festivities can go on for up to 21 days, the first three are the most important and the food prepared on each day changes.

The first day, tay or tai, is dedicated to Gauri or Parvati, Ganesha’s mother. The food prepared on this day is meant to satiate her pregnancy cravings. “We believe Parvati is craving dishes without salt, so we make a paanch palyachi bhaj, using leafy vegetables typically found in our gardens. It is prepared by simply boiling it and adding a tadka. It is only prepared that day and not eaten at any other time,” says Anagha Dande, who caters Saraswat food under her brand, Anuja’s Takeaway. The five vegetables used are a mix of tambdi bhaji (red amaranth), val chi bhaji (Malabar spinach), moringa (drumstick leaves), alu (colocasia leaves), hog plum leaves and more. Another dish made that day is patoli – a typical monsoon delicacy of rice flour paste filled with a coconut and jaggery mixture, steamed inside turmeric leaves. The tay patoli doesn’t have salt and is often offered to the goddess without the filling.

Patoli is a traditional sweet preparation eaten on the first day of chovoth. Credit Tanavi Raicar

Many married women observe this as a day of fast, abstaining from rice preparations and only eating fruit, a simple sabudana khichdi, and patoli made with wheat flour.

Ganesha enters the home on the second day, Chaturthi. The god is believed to have a sweet tooth and is fed 21 modaks. “It is Ganpati’s day and the most significant one. We prepare purnachem modak with dal, coconut and jaggery mixture stuffed in a wheat flour wrapping and deep fried. The same filling is shaped into a neuri and eaten with the meal,” says Dande.

Neureos are crescent-shaped sweets made with a maida, wheat flour, rava or sweet potato coating and a stuffing of dry coconut and sugar or wheat flour, sesame, khus khus and coconut (pitachem nevri). Besides these two sweets, there is mangane – chana dal kheer with jaggery and sometimes prepared with sago, and milk modaks.

A popular dish of the day is khatkhatem – a mixed vegetable stew. “Khatkhatem is prepared either on the second or third day. It should have 21 vegetables like mooli, breadfruit, raw papaya, snakebean, raw banana, ambade, cucumber, bhendi, ghosale (ridge gourd) etc, simmered in a coconut and tur dal gravy,” says Shubhra Shankhwalkar, who caters Goan Saraswat food under the name Aai’s. Other dishes include val chi bhaji, chane tondak or chonyacho ross – green or white peas in a coconut curry, bimblachem sasav – a sweet and sour curry made of bimbli (tree sorrel), and ghosalichi bhaji (ridge gourd). The curries made are either ross – a light coconut version with a tadka or tondak – a coconut curry heavy on the masalas. Bread is not typically eaten, instead there are puris and vadem – rice flour and urad dal (split black gran) puris.

In her e-book dedicated to Ganesh Chaturthi recipes, Neelam Dutta of Ranchikood-The Goan Kitchen writes, “Thanksgiving is integrated in the Ganesh Chaturthi festival celebrations – various rituals are performed to give thanks for the food we eat and acknowledge/be aware/connect to the food source. Rice is a major component of Goa’s staple diet. On Panchami, a few of the new paddy strands (called Nave) are worshipped in a ritual called Navyachi Puja. Rice pudding or navyacho pyes with a few unprocessed rice seeds are offered to god.”

Another sweet dish is sanna, an idli-like steamed snack of rice with urad dal, eaten by dipping it in a ross of coconut milk and jaggery. Traditionally, these are cooked in jackfruit leaves shaped into cones.

The staple on all three days is varan – tur dal with coconut, toye – dal heavily flavoured with ginger, saar – a rasam-like concoction made with tomato and coconut milk or the leftover liquid from boiling lentils, and sol kadhi. “Vegetables like suran (elephant yam), breadfruit, raw banana, pumpkin buds are sometimes coated in rava and fried, called fodi,” says Shankhwalkar, who has been documenting traditional Goan recipes learned from her mother and her mother-in-law since 2003.

Tomato saar is a cooked on all three chovoth days. Credit Shubhra Shankwalkar

Kheer, with tapioca or sheviya (vermicelli), is sometimes made as a sweet dish. There’s also fenori (chiroti), a deep-fried crispy layered pastry dusted with sugar. All snacks, collectively called faral, are typically homemade.

Vegetables and fruit star in another important aspect of the celebration. The matoli is a wooden awning decorated with seasonal biodiversity like wildflowers, leaves, medicinal herbs, fruit and vegetables. “Matoli showcases the yield of your garden plus forest yield: coconut leaves, chikoo, bananas, ambade, pomelo, mango leaves, and coconuts in four corners. There are many reasons for the practice – invoking the blessings of god on this produce, encouraging the growth of these fruits, vegetables and flowers and highlighting the diversity of the region,” says Usgaonkar. The different leaves called patri are tied in bunches and hung. A bundle of blades of grass called dudhva/durva also forms part of the puja, as do betel leaves and betelnuts.

A prepared matoli showcases the bounty of the region, with fruits, herbs, and vegetables. Credit Purnima Usgaonkar

Every home has a different kind of matoli, whose contents are picked up individually by families or from special matoli markets in Margao and Banastarim. "Our matoli usually has kandla and karmala (wild plants), katro (arecanut bundle), ghosali, lady finger, tavshi (cucumber), bananas, apples, pomegranate, mogem, and pomelo,” says Raicar. “On the day of visarjan, the fruits are included in the prasad given to people, called donem, and the vegetables get distributed among the family.”

As is expected from a festival that includes a lot of food, even the prasad is delicious. Besides donem, there’s paanch khadya, a mixture of coconut, jaggery, roasted moong dal, elaichi powder, cashew nuts, cardamom; and paanch khaje, which are modaks shaped into different forms. 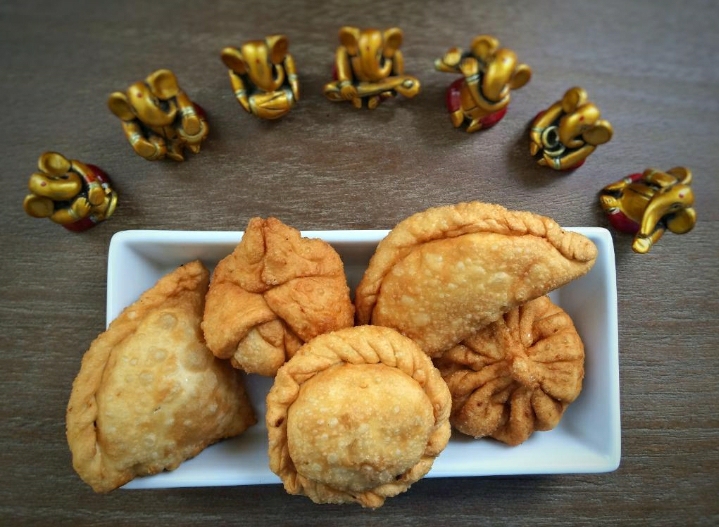 Unlike Mumbai and Pune, Ganesha Chaturthi celebrations in Goa are largely focussed on family. It’s a family get-together, and the celebrations include feasting, prayer, devotion and tasteful entertainment. An integral part of the chovoth celebrations is the sense of community. Non Hindus will visit different people’s houses to wish them, admire their matoli, and get fed. It is a well-known fact that no one leaves a Hindu home during chovoth, hungry. If not asked to stay for a meal, visitors are fed snacks like chakli, shankarpali, shev, chivda, rava ladoo and pityache ladoo. Often, people will send tiffins of neuris, modaks, chonyacho ross, and bhajis to elderly neighbours who cannot visit.

Chovoth, which celebrates a god who likes to eat, is fittingly a festival of culinary diversity.

The road to paradise

A tale of two commis

Creating during COVID-19: on valuing the arts